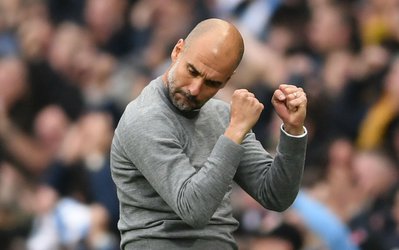 The Blues have been confirmed as champions with five matches to spare, and matters had been complicated by a rearranged game against Brighton

Manchester City will be presented with the Premier League trophy following their game with Huddersfield on May 6, Goal understands.

City were confirmed as champions on Sunday following Manchester United’s shock defeat at the hands of West Brom.

The Blues still have five games to play this season, including three at home; against Swansea City on Sunday, Huddersfield a week later and Brighton & Hove Albion on Wednesday, May 9.

The Premier League usually presents the trophy following the champions’ final home game, where possible, but that will not be the case this season.

Brighton will be the final team to visit the Etihad Stadium, after the original fixture was rearranged due to the Seagulls’ FA Cup involvement, but the decision has been made to stage the celebrations after the clash with Huddersfield instead.

Several factors have been taken into account, including the fact the game will be shown live on Sky Sports in the United Kingdom, allowing fans around the country to tune in.

City may have already been named champions but they can still set a number of records this season depending on their results in the next five games.

Should the Blues win three matches they will beat Chelsea's total of 95 points, and if they win all five they will be the first team to top 100 points in a season.

City have won 14 away games this season and, if they triumph at West Ham and Southampton, they will also top Chelsea's record of 15.

Pep Guardiola's side could also set a new record points margin between first and second place. They are currently 16 points clear of Manchester United, and the biggest gap in Premier League history is 18 points set by United in the 1999-2000 season.